Tiffany lamps, still extremely famous and adopted in many homes, owe their name to Louis Comfort Tiffany, son of the co-founder of the famous jewelry which is protagonist in the film with Audrey Hepburn. The son of the best-known Charles Lewis, in fact, soon showed a great passion for glass processing, which led him to success with a company different from that of his father (although in the course of his life he also made several jewelry).
However, the history of the famous Tiffany lamp, a symbol of the movement that took the name Art Nouveau, is definitely more complex.

The story begins with a very young Louis Comfort Tiffany who, in his early twenties, decides to embark on a trip to Europe (all young American dandy had to make at least one). During one of his visits, the boy was particularly fascinated by the principles of the Arts and Crafts movement that developed towards the end of the 19th century in Britain, which revalued craftsmanship at the expense of industrial production, qualitatively unsatisfactory and designed for the masses.

Returning to his native country, and being able to count on an important heritage, the young man began to apply the principles learned in Europe to the processing of glass, making furnishing accessories and in particular lamps in lead glass, which has a brilliance higher than the traditional one.

However, in his company’s early years, the Tiffany lamp as it is known today did not yet exist. We will have to wait until the arrival of a particularly creative woman, Clara Discroll, who will draw sketches and propose to Louis C. Tiffany an absolutely innovative method to make the today well-known lamp: the tin.

It was the young woman, formerly employed in another company, the idea of cutting out the glass (on which Tiffany’s studies had been concentrated for many years) and to coat the pieces on the perimeter with a copper wire, to later combine the several fragments together – through tin welding– and give life to the real Tiffany lamp.

With this new technique there was literally an exploit of the company, whose works were incredibly appreciated by the noble American houses of those years. 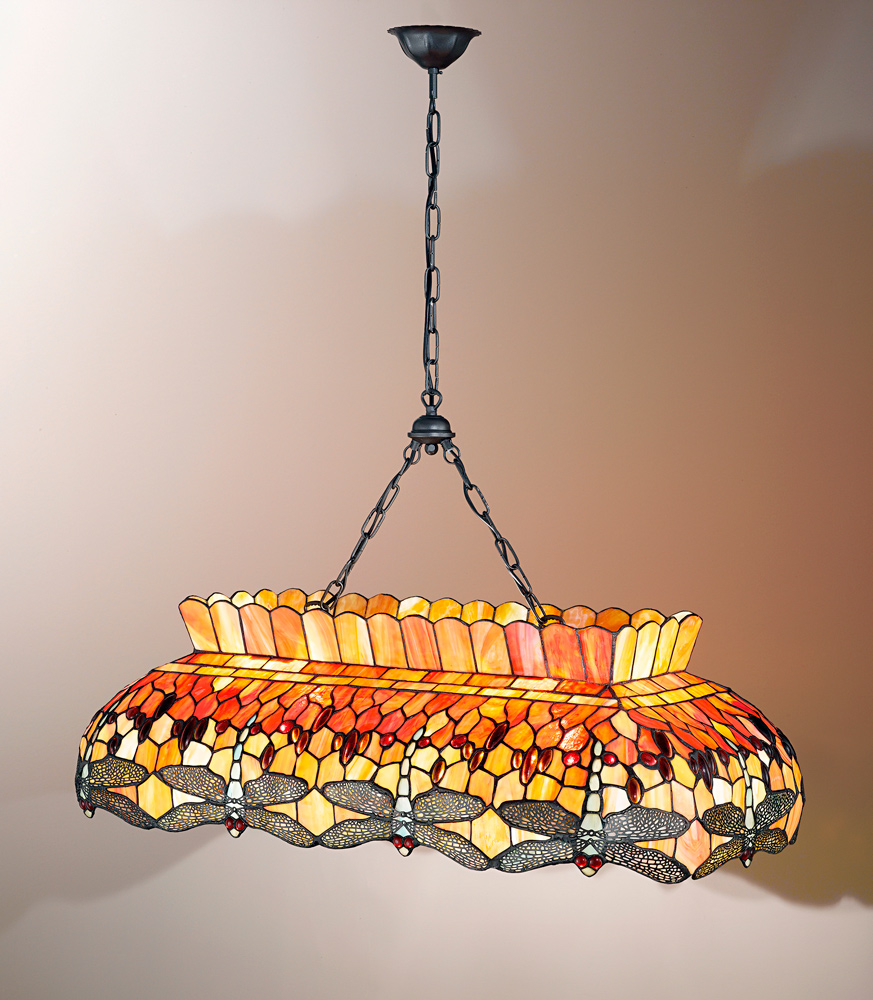 To the equally famous Favrile Glass Vases (a Tiffany brevet), were then added the famous lamps, handcrafted for several years and under the supervision of Clara Discroll. The first work of the woman was the Daffodill lamp, but according to some sources the Tiffany dragonfly lamp is also her creation, as is the Dragonfly, which was awarded at the 1900 Paris World’s Fair.
From the collaboration with Thomas Edison, inventor of the light bulb, decorative lighting was born for all environments, which was the protagonist of the very early years of the 20th century.

For a selection of Tiffany style lamps :https://www.lucillaplace.it/i-nostri-marchi/perenz/tiffany/